Transatlantic is earning an 80% interest in the historic Monitor Mine Copper Gold Property in the Coeur D’Alene Mining District (Silver Valley), Idaho.

An NI-43-101-Compliant Report on the Monitor Property notes that historically, approximately 1,500 tons of copper-gold-silver bearing ore was shipped to the Pugent Sound Smelter.   The mine was closed after the great Idaho fire of 1910 and never reopened.

The Monitor properties mineralization occurs in wide, steeply dipping vein systems, with a standard width of 10-15 feet reported.  In one existing crosscut, vein width is reported as much wider, as the hanging wall of the mineralized structure has not been located.  District-wide characteristics of ore grades increasing at depth, and the presence of similar, parallel zones of mineralization are noted within the Monitor system.

This trend is recognized in adjacent properties within the Coeur D’Alene District, such as the Galena Shaft, where veins show ore only below the 2400-foot level, and the Lucky Friday where the mineralized veins are present within similar structures at 6100 feet. 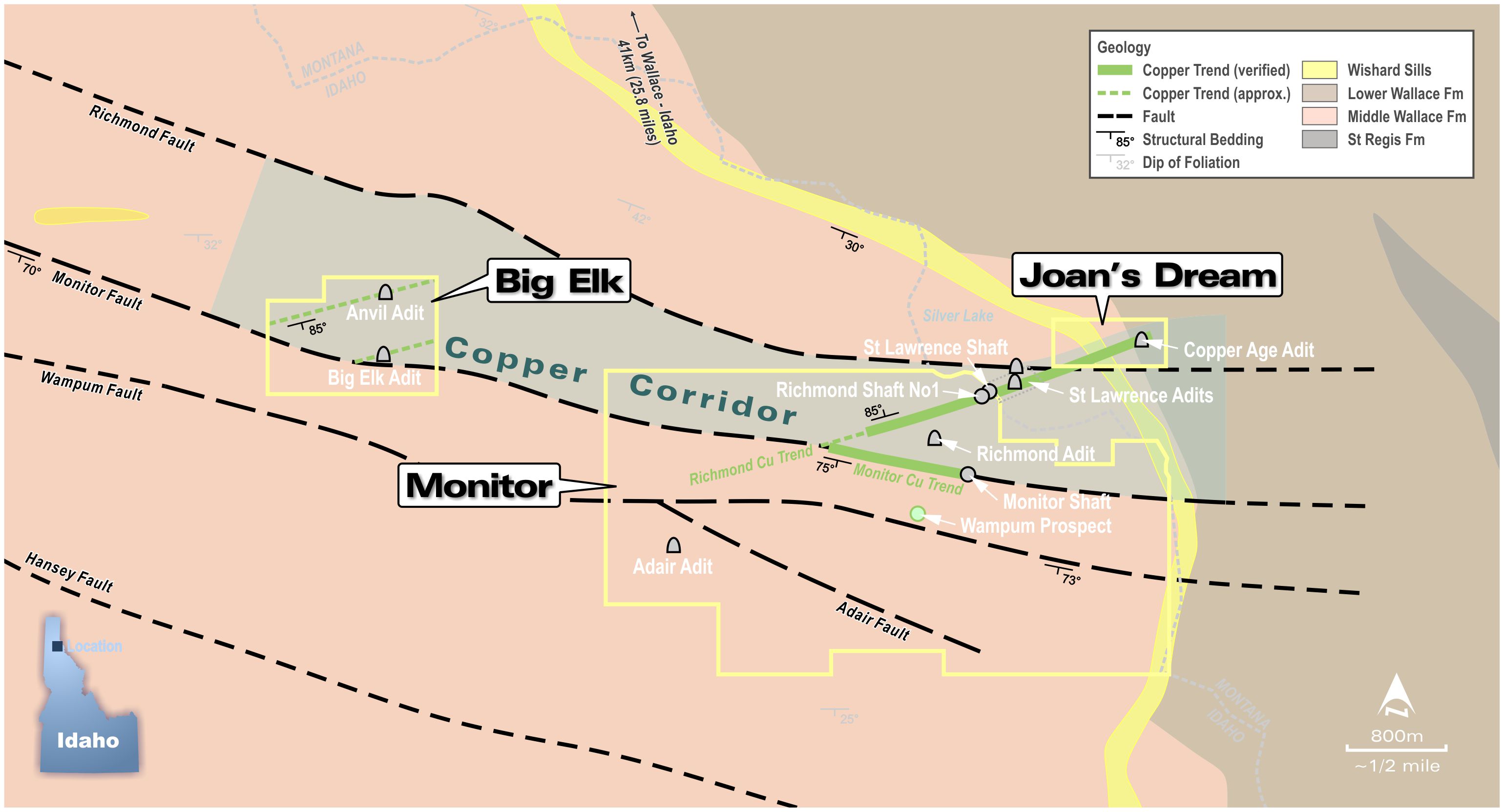 The Coeur d’Alene Mining District is the second largest producer of silver in the world (Mauk and White, 2004), following Potosi in Bolivia.  The Coeur d’Alene district has a well defined district-scale zonation of the chemistry and metals in its veins. With some exceptions, the veins in the western part of the district tend to be richer in Pb-Zn, those in the central parts are richer in Ag, while those to the east and southeast are enhanced in Cu with byproduct Au and Ag; the veins on the Monitor property belong to the latter group.

All the significant ore deposits in the district lie within twelve well-defined, sub parallel mineral belts, some of which are base metal rich while others contain more silver. The latter are found within the 8 km long “Silver Belt” which is located south of the Osburn Fault.  This contains numerous Ag-rich mines including the Crescent, Sunshine, Consolidated Silver, Coeur and Galena.  The Silver Belt is flanked to the west by the Bunker Hill Mine in which Pb-Zn was predominant, while to the east the veins are Cu-base metal rich. The recent increase in base metal prices has resulted in the veins further east being now explored for their Cu-Au potential.

The Monitor Mine was discovered in 1891, and mined until the fire of 1910 which destroyed all above ground infrastructure. In the late 1920’s, an approximate 4000 ft crosscut drift was constructed to the northeast from near the Adair site, in order to intersect the main Monitor vein at a deeper level than the existing 700 ft Monitor shaft.

Production was stopped after the fire of 1910, as above ground infrastructure was destroyed.   In the 1940’s, Day Mines bought the property in a tax sale; however, the property remained dormant and non productive.   In the 1980’s, Hecla took over Day Mines and used the patented claims as leverage in a land exchange for properties surrounding the Lucky Friday Mine near Mullan, Idaho.

The Monitor Shaft extends to 700 ft below surface level, with a series of 5 drifts in the vein and the ore shoot opened on each level.

The 4000 ft Monitor adit intersects the Monitor Vein at the 1200-foot level.  At this level, the vein of mineralization is measured to be 10-15 ft.  This adit allows access to a lower portion of the Monitor Vein, as well as adjacent properties and parallel to sub parallel-mineralised structures encountered during construction, significantly reducing potential capex and development time.

Transatlantic recently completed a surface exploration drill program on the Richmond Vein and received a permit to access the Monitor adit. Examination of the tunnel by Transatlantic geologists in 2013 indicates that it is structurally sound 4000 ft from the portal. The surface drill program was designed to explore for sulfide ore shoots along strike of the known high grade veins.

Rehabilitation of the underground workings will permit cost-effective exploration of veins from underground in order to develop mineral resource and expedite development of the project.

Transatlantic plans to drill further and assess a 10Kt bulk metallurgical test along with an exploration program to develop and test other targets at the Monitor property.